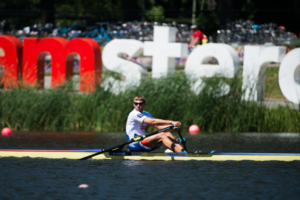 The favourite to win the Ladies’ Trophy this year is Annekatrin Thiele. The German sculler and Rio Olympic Gold medallist and double Olympic Silver medallist left an impressive calling card in the first semi-final by winning in dominant fashion ahead of Mette Petersen from Danske Studenters RK and Fiona Ewing from Sydney UBC. Joining them in the final are Euros’ Minke Holleboom, the winner of the second semi-final, Cara Grzeskowiak from Capital Lakes Rowing Club, and Janneke van der Meulen from Willem III Amsterdam. Come and see the grand finale at 15:34h!

In the line-up for the Holland Beker final, which will start at 15:50h, two legends stand out: Mahé Drysdale of New Zealand and Ondrej Synek of the Czech Republic. Both won their semi-final with relative ease and will be looking to add another Holland Beker victory to their impressive trophy cabinet. In addition, reigning Olympic Champion Drysdale will want to prove he is still the best, and beating his arch rival and friend Synek will do just that. Meanwhile, Synek wants to show his speed in preparation for defending his title at the 2018 World Championships.

Scullers Julius Peschel from RC Hannover and Petter Tufte from Norske Studenters RK were not far behind in this morning’s semi-final and will hunt the two down to the finish line. Eskil Borgh from Sweden and Sam McKneown from Queens University Belfast BC complete the line-up. These rowers are part of the younger generation, and are eager to show their skills next to the Olympic greats in a head-to-head race.

Other races to look out for are most definitely the W8+  and M8+, at 16:15h and 16:22h respectively. Winners of these races will be crowned Open Dutch National Champion. In the womens’ final, the Dutch senior eight is a clear favourite. However, they will face hot competition from the Dutch Under 23 eight, a strong boat from the University of Iowa, and the eight from Nico Rienks’ SilVia project. In the M8+ race, yesterday’s winners from the US will need to up their game if they want to reach the finish first once more: the Dutch FISU World Championships eight managed to row almost 17 seconds faster than the US Composites in this morning’s time trials. Also watch for the fast eights from Laga/Aegir, Skøll Amsterdam, and the Dutch Junior eight.

Similar to the eights races, the winners of the quad finals (W4x and M4x) will also receive the title Open Dutch National Champions (at 16:33h and 16:40h respectively). The golden Dutch women’s quad from the first World Cup in Belgrade has been brought back together and look confident to take the gold medals home. In the other lanes, an interesting battle will take place between the Danes and the second Dutch quad, including Olympic gold medallist Ilse Paulis and Olympic silver medallist Carline Bouw. Also, watch out for the lightweights from Triton/Nereus/Vidar, who are looking to surprise the field. The favourites for the M4x final are undoubtedly the crew from Skøll Amsterdam: after an impressive start they led the field almost 9 seconds ahead of the Indonesian crew in yesterday’s final. Don’t put all your life savings into the betting office just yet however: Skøll decided to skip this morning’s time trial, while Indonesia delivered the fastest time. Forfeiting their chance to race for lanes, Skøll may regret their decision as they possibly face the toughest headwind of the course.

In the M2- at 17:10h, there will be an interesting fight between the Rienks brothers (Nereus/Laga), a Lyon combination, CR Flamengo, and the new Dutch men’s pair featuring Kaj Hendriks and Harold Langen from Triton. The latter will be very eager to show that they are still the fastest pair of the Netherlands after winning the National Title in April.

In anticipation of the Holland Beker and Ladies’ Trophy, the Freshmen’s finals will start from 14:30h. Unlike the Development finals yesterday, no points for the national competition will be available here. The top 6 crews of each freshman competition will battle for the honour of crowning themselves victors of the Aegon Koninklijke – Holland Beker, a once-in-a-lifetime milestone in the life of a Dutch Freshman club rower.

Let the battle for the finals of 2018 begin!