Behind the scenes: Umpiring at the Koninklijke Holland Beker

When the tan lines finally start showing, you know we have arrived in June, a.k.a. the month of the Koninklijke-Holland Beker. Let’s get this party started! June 25 and 26 it is all going to happen. While the organizing committees are busy writing articles for the website, ordering food stands for the event and shooting pictures for the poster, there is another group of rowing enthusiasts without whom the event could never take place. Today we meet Tom and Laura, two umpires in heart and soul. Passionately they talk about the ins and outs of being an umpire in general and the different adventures it has brought them so far and of course how they are preparing for the KHB.

Looking forward to the KHB

Tom: “Yes, the Koninklijk-Holland Beker is coming right up, that is always a great event! In the first place because it is an international race, which makes it special in several aspects. The variety of international athletes appearing at the start is always a pleasure. In addition, the umpiring world is quite small and at international events you meet umpires from all over the world. Could be that I’ll be drinking coffee with an Australian farmer who happens to have a passion for rowing too. How great is that?” Laura nods in agreement: “The umpires with an international license are divided among some of the crucial spots. All umpires that are only allowed to judge Dutch races take up the remaining tasks. At national events we divide the tasks based on the different levels we have (A, B and C*), while during the KHB we make a distinction based on national vs international license. Therefore, the difference in A vs B disappears at such a race which makes it extra fun for the umpires with a level B license.”

How it all started

As expected, we ask about what Laura has been up to with rowing and our mouths drop when she starts talking about her rowing resume. Of course, nothing can go wrong if the beauty of rowing has been instilled in you from your childhood. And what is more romantic than a first rowing stroke taught to you by your grandmother? Laura made her first strokes on the waters of Salland (Overijssel) but admitted sometimes preferring lying back in the skiff back then. Not sure whether it was this sunbathing or her grandmother’s rowing education that brought her to the Coupe de la Jeunesse in 2005. Impressive, Grandma could be proud! Unfortunately, an injury kept her back from rowing for a while. Even when she joined the student rowing association W.S.R. Argo in Wageningen, she committed herself to the cooking committee with in her hand a spatula instead of oars. Until the day that Argo’s women’s four needed replacement. From that day on, Laura and rowing are completely intertwined again. We can be happy with that. Laura has been an enthusiastic umpire for quite some years now. An indispensable element of rowing: without umpiring no racing!

We ask which qualities a good umpire should bring to the table. A suitable character can act calm, read situations, and regain control if needed. This can be done by pacifying, listening, providing good feedback, and showing empathy with the rowers. Therefore, it certainly helps if you bring experience in lying at the start of a race yourself. In that case, you can better sense when rowers are on top of their nerves. You know that comments regarding rowing suits or shoes in the boat could make rowers furious. Even though these details are so important to check. Tom: “Beforehand, as a rower, you hardly think about how dangerous it is if the shoes are not fixed correctly and what can happen if your boat capsizes.”  Laura: “If I pull them off before a race, some rowers get extremely stressed. That does not always make us loved. Having a few extra laces in your pocket however can clear the air again.”

A day as umpire

If you recognize yourself in (some of) the above points, do not hesitate to sign up. The KNRB can certainly use some extra manpower. It is definitely worth it if you ask Tom and Laura. A warm group of like-minded rowing enthusiasts awaits you with whom you have nice contact throughout the season. Tom: “On a typical race day you usually work in blocks. Some are checking boats at the docks, others are present on the water during the races, guiding the boats through their lane. Of course, we also have the spots at the start and the finish. The start is especially a favorite for many.” Laura: “Every race is different. How to act also really depends on which boats are in front of you. For an eighth or a coxed four you really need your megaphone. For the smaller numbers you can sometimes do it without and ‘steer’ by instructing the motorboat driver to put the boat behind a certain crew and thereby give a signal.”  The final sprint of a race is something to carefully think about. Tom: “Towards the end of the race you usually know who will be swinging from left to right across the finish line. I always try to correct the crew in question already at the 1500m line. After 1750m, the rowers put on blinders, then I usually save myself the trouble of calling them out.” 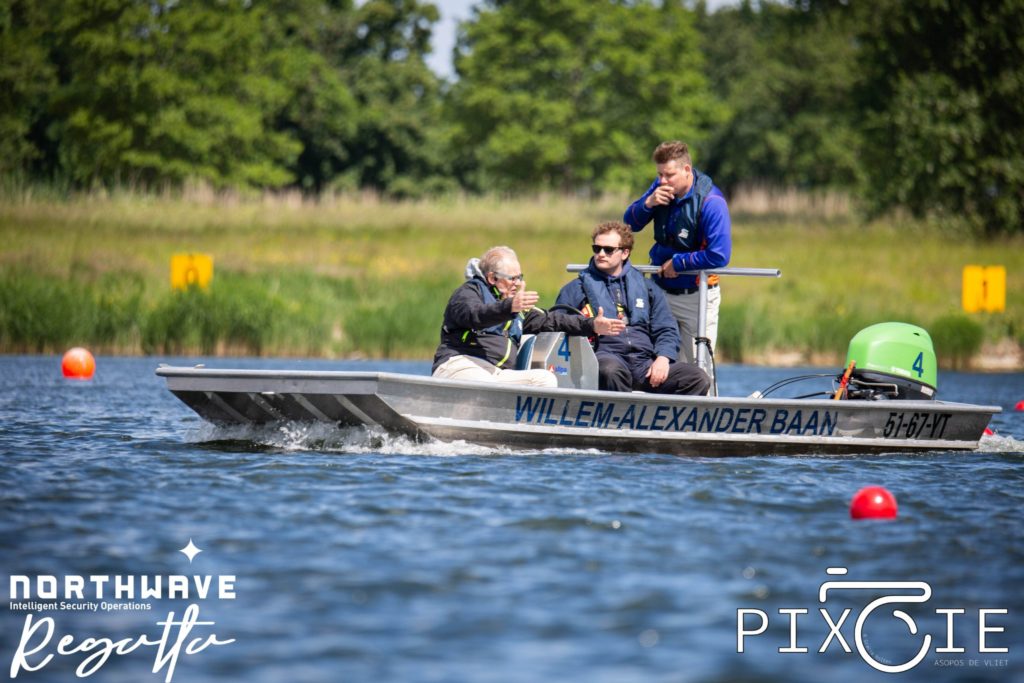 Tom’s rowing career is special in any case. He has been a loyal member of the umpiring committee for quite some years now and visited many national and international races all around the world. Tom comes from a real rower’s nest. His daughter, Lisanne van der Lelij, is part of the women’s selection of A.U.S.R. Orca and has quite some medals on her name. You may also have seen his wife at world rowing events. What’s even more special is that last summer Tom was the chosen one to go to the Olympics in Tokyo as umpire. Wow! Only one Dutch umpire is selected per Olympic cycle. For Tom it became a memory to never forget. One from which we could have made an entire article on itself. Fortunately, Tom has already done that job, see https://roei.nu/dagboek-tokyo-van-kamprechter-tom-van-der-lelij-zaterdag-24-juli/. In preparation for the Olympics, the Dutch rowers may be happy with Tom and his colleagues. Tom: “Since we are weighing boats, they have no longer been outweighed internationally. In Tokyo I weighed the Dutch Holland8, it was over a kilo too heavy! By acting strictly in the Netherlands, we teach rowers what heat does to a boat. Acting this way, we try to prepare them for the international field and rules.”

Laura: “I enjoyed the Varsity a lot. The Varsity is just different from other races. You don’t have your standard amenities. I was unexpectedly allowed to umpire in the ladies 4 final. I was so happy and honored! Imagine, 6 coxless fours, without clearly defined lanes. I was in a lifeboat and was wedged in the front. My whole leg was bruised afterwards. Yes, that was really cool.”  Tom also has a beautiful memory. A KHB memory. “Speaking of competitions where there were boats swinging from left to right. Athens (Olympics 2004) arrived, and NZ had the Olympic four appearing at the start of the Holland Beker. The two teams were too close to the edge of their lanes, and I was standing there with my bum squeezed. Something had to be done or they would collide. Normally, adjusting direction causes imbalance in a boat with more inexperienced crews, but here it went so smoothly. The Olympic level is really impressive.” Tom imitates the sound of the rowboat getting back on course and shows us how sharply they acted. “That’s the beauty of being an international umpire. You are part of the top of the rowing world in a way and that is simply a spectacle!”

The joy of umpiring clearly shows off from Tom and Laura. In our opinion, they deserve a warm applause. Without umpires we would have been lost. We will see each other soon at the Bosbaan. We will raise our glasses to a beautiful KHB edition including the international rowing top, happy supporters, and a great team of umpires!